Jeanerette residents enjoyed visiting the vibrant Macoine's store on Main Street next to the current Iberia Bank. The store was filled with the tangy smell of fresh red, juicy apples but the favorite of many residents was the sight of the old fashioned candy jars stuffed full of tempting sweets.
Macoine's was a tradition for well over 70 years. It began as a fruit stand when Carlos Macoine arrived from Italy with his family. Following his death in 1932, Mrs. Macoine and her 12 children took over the family business.
The last of those children to operate the business were Therese and Marie.
Marie still sold candy by the piece allowing children to select different types from the large jars. She loved seeing children come in to purchase candy.
The store itself had an old fashioned appeal as Marie preferred to keep things as they were in the past instead of buying modern displays. It is that old fashioned decor that people looked forward to at each visit.
Once the store carried staples like bread, milk, onions and potatoes but it was the large selection of candy that appealed to most customers.
​Marie had many memories of the store's past including selling bread for a nickel during the Great Depression.
​She remembered her mother shucking oysters and struggling to raise the family. While there were other jobs for women, Marie never was interested in working anywhere other than the store she grew up in.
​She and her sister still lived in back of the store in the 1980s and enjoyed talking to all of the people that came by.
Macoine's store was a true asset to the community and is fondly remembered as well as its owners, by many of the citizens of Jeanerette.
Posted by Jeanerette News at 10:01 AM No comments:

Anniversary of Jeanerette's Role in the Civil War 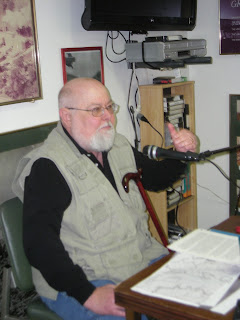 One hundred and fifty years ago, on April 14, 1863, Jeanerette was in the middle of the Civil War. The role Jeanerette played during this war was discussed in a history talk led by well known historian, Roger Busbice, at the Jeanerette Bicentennial Museum. By the morning of April 14, both the Union and Confederate armies were in position. The patched up gunboat Diana was in Bayou Tehce ready to support Conferate commander General Richard Taylor, Busbice said. The Union army, consisted of fresh troops while the Confederates were outnumbered and near exhaustion. As the Union troops advanced towards Nerson's Woods near Franklin, they found the Confederates ready to fight. Union troops fired at the Confederate line. The Confederates responded as the Gunboat Diana's shells began to strike the Union troops, Busbice said. Casulaties were high on both sides.Confederate forces led by Colonel Tom Green near Centerville tried to slow the advance of Union troops coming from the east. Despite success at Irish Bend, General Taylor knew that Yankee troops would soon surround his army so he gave the order to begin a retreat to New Iberia using the Yokely Bridge. The bridge was burned by the Confederates after they passed. The Gunboat Diana was destroyed by the crew near the courthouse in Franklin.The Confederate hospital boat, the Carnie, was tranferred to Union control, Busbice said. "General Taylor's army, having eluded Bank's newly designated Army of the Gulf, spent the night near Jeanerette camped on the grounds of Albania Plantation," Busbice said.This was the role that Jeanerette played during the war. On Grand Lake, the next morning small Confederate and Union gunboats entered into a battle which resulted in the loss of the Confederate vessel, Queen of the West.The Confederate army, facing a lack of food and medicine as well as desertions from some of the country troops struggled through New Iberia towards Vermilionville (Lafayette), Busbice said. On April 16, Union troops marched into New Iberia terrorizing residents and looting much of the town. The next night the salt works at Avery Island were destroyed and Union General Nataniel Banks, ignoring the protests of the Moore family, established his headquarters at the Shadows.
﻿
Posted by Jeanerette News at 9:17 AM No comments: