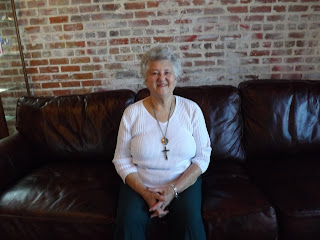 A positive outlook and willingness to help others has provided for many enjoyable experiences for the 2016 Jeanerette Outstanding Citizen, Nell Derise.

Derise grew up in Jeanerette in those days when country stores were a way of life. Her father ran a grocery store while her uncles tended to the sugarcane farm. Derise soon became a part of the family business when her father asked her to add a list of numbers.
“When I was nine he (her father) asked me to add a column of figures and that’s how I ended up helping in the store,” Derise said. Life was simple and good for Derise who would fill her days by working in the store and going to school. After school she would sometimes work alone in the store while her father delivered groceries to his customers.
“He used to deliver the groceries to the homes, especially to the elderly who didn’t have cars,” she said.
It was those early experiences that inspired her to work with other people and to constantly learn new things. Coming from a family of four sisters and one brother, Derise used the work ethics she acquired to aid her quest of going to college. Through small jobs and scholarships she was able to receive her PhD.
Derise has always felt at ease with people. Everyone she meets tends to be a friend.
“I tend to mix well. I always felt that people wouldn’t hurt me,” she said.
After completing college, Derise began teaching nutrition courses at various colleges. She said that science has always fascinated her and she enjoyed teaching.
Derise also loves to travel. “I was always adventurous. I constantly want to learn something,” she said.
Derise has traveled all over the world and has had many thrilling experiences including shaking hands with Pope Benedict. Her strong faith has led her on many religious pilgrimages. Derise has seen Pope John II and hopes to one day see Pope Francis.

While many places she has traveled to have been enjoyable, Derise admits that she is most fascinated by the Amish communities in the United States and hopes to go back to Pennsylvania one day.
“I love the Amish communities. They were very open and friendly but also private.
They remind me of myself. I’m open and friendly but tend to find out more about others then they learn about me,” she said.
When not traveling, Derise enjoys her quiet life in Jeanerette living on the land that she grew up on. She enjoys being involved in the community as much as she can.
“This is my home. If Jeanerette is to get bigger and better it will come from the people. It needs people to make the community whole and to grow,” she said of the reason she is a dedicated volunteer.
“I still remember Jeanerette as a child. It is so different now. There were more people,” she said. Jeanerette’s future will depend on people working together she added.
“I think we all need to learn to work together and to have the same goals. It’s not happening right now and it’s holding Jeanerette back. That makes me very sad,” she said. “Young people are our future. I hope they will work to improve our community.”
Derise is optimistic that Jeanerette will continue to be a wonderful community if volunteers keep striving to help the various organizations in the city. She is very humbled and honored to be this year’s Outstanding Citizen even though it was quite a surprise to her.
“I didn’t believe it at first. I thank God because it had to be His doing. I never felt that I would have been chosen,” she said.

Posted by Jeanerette News at 12:16 PM No comments: