Posted by Jeanerette News at 10:44 AM No comments: 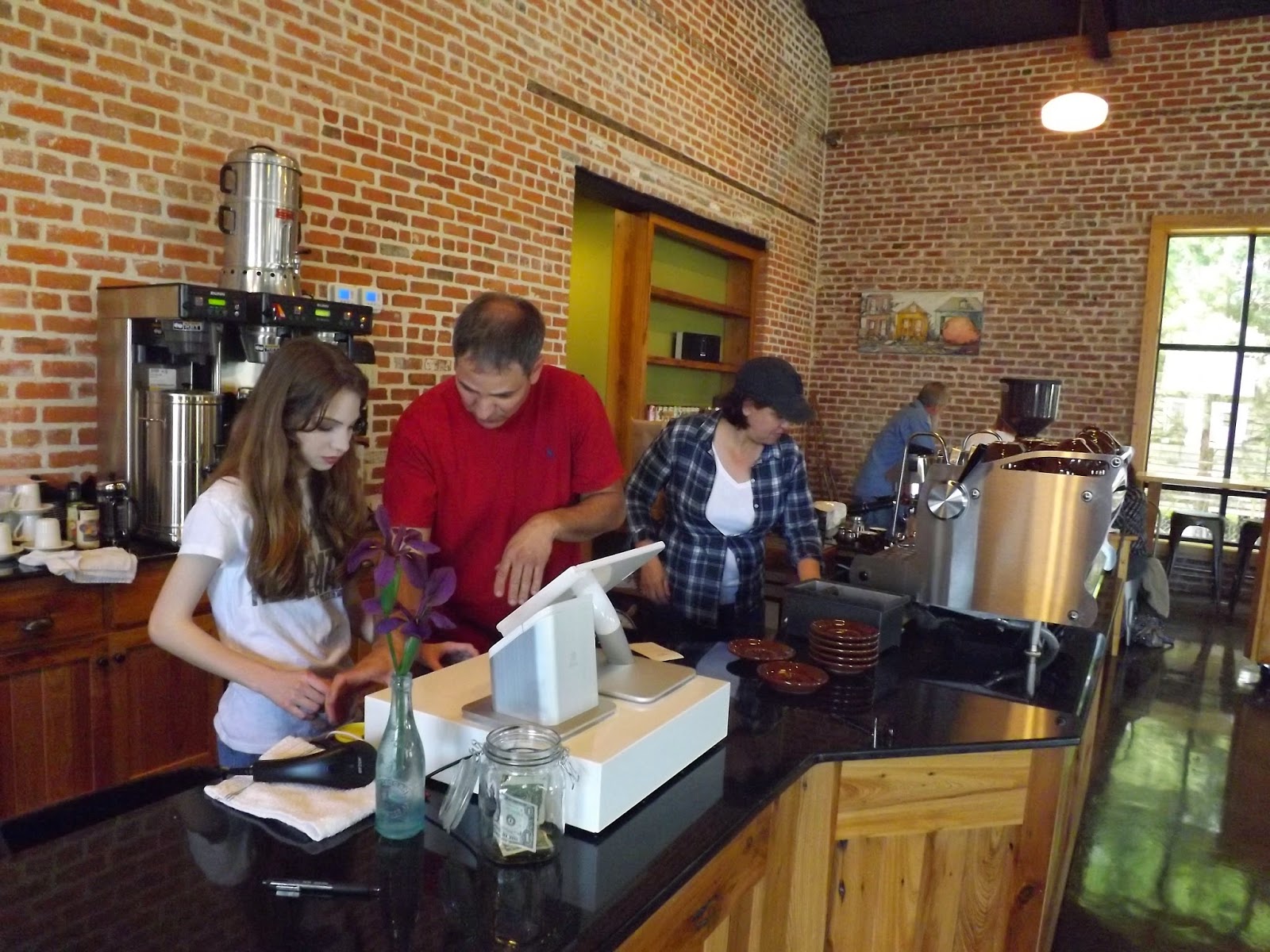 A love of small town life and a good cup of coffee led to one local couple opening an unique coffee house in Jeanerette. Anatole and Jennifer Robin Larroque opened Cooper Street Coffee to give the community a place to gather.
"We like coffee and we thought we needed a meeting place and gathering place in town," Anatole said. The new coffee house opened recentedly in the historic Louisiana Public Service Company building. The building was lovingly restored to keep true to its historic features. All the windows were reopened  and the original beams were sandblasted. The coffee house features a full commercial kitchen and tables that were crafted by a local wood worker from reclaimed cypress boards. The lumber industry was part of Jeanerette's early history and the little details to restore the building have made it a true showplace.
The building has been owned by the Larroques for over ten years and was used for storage until the idea of opening a coffee shop came into action.
"We researched coffee shops a couple of years ago but what we found wasn't what we wanted to do," Anatole said. He explained that most coffee houses are in college communities and didn't quite fit into the small city atmosphere of Jeanerette. The Larroques decided that they wanted to open a coffee house that would appeal not only to working people but to people of all ages that enjoyed gathering for good conversation.
The new coffee house will serve fresh brewed coffee, cappuccino, latte, mocha, expresso, tea, homebaked biscuits and pastries.
"We serve premium coffee," Jennifer said. "Coffee beans are from small batch roasters that get beans from all over the world. They try to find the best beans." "Everything is fresh," Anatole added.
Cooper Street Coffee is currently open Monday through Friday from 6 a.m. to 2 p.m. Doors open on Saturday at 7 a.m. and on Sunday at 10 a.m. Future plans will include special events, and acoustic music.
"We hope others will reinvest in our community," Anatole said. "It's beautiful here. It's what you make of it. I like small town life."
The Larroques hope that more businesses will locate in the city and are looking forward to hearing the stories that will be told in their new home, Cooper Street Coffee.
Posted by Jeanerette News at 6:43 AM No comments: 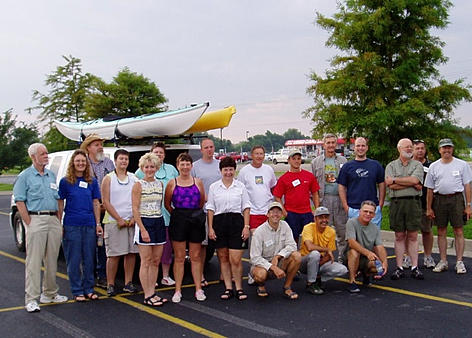 Paddlers attending the first Sugar Mill Paddle sponsored by the Jeanerette Chamber of Commerce ten years ago have made their way back each year.  Through the years, paddlers from 40 states and over 10 different countries have visited Jeanerette and our local waterways. As many as 200 paddlers a year, enjoy the culture of our area, the natural beauty, and the waterways surrounding Jeanerette.
Members from the first group from Texas have stayed in Jeanerette each year to attend the spring paddles that are held in the southern part of the state.
This year these paddlers along with new paddlers will once again enjoy paddling in Louisiana as Paddle Scenic Louisiana is held. Paddlers still have time to join in the April event. Paddle Scenic Louisiana will be held from April 7 to the 13 to give Louisiana visitors an opportunity to enjoy Louisiana's waterways, environment, and cultural activities whether coming for a week or a few days. This year's event will travel in the Atchafalaya Basin, Grand Avoille Cove, Bayou Teche, Bayou Portage, Yellow Bayou and other areas. The paddles are free of charge providing that participants have their own boat, equipment and supplies. Paddling experience is also required.
To join in the event email needtopaddle@yahoo.com for an entry form and information.Paddlers planning to participate in this year's event are from Florida, Wisconsin, Texas, and Mississippi. Local paddlers from Louisiana are also expected to attend.
Those attending the weekday paddles from April 7-9 will experience paddling pass antebellum and historic homes, sugar mills and cypress trees while enjoying the native birds and wildlife. This group paddle is self supported and free to join in however you must provide your own boat, paddle equipment, food, snacks and camping supplies. Tent camping is available at a private home on the bayou or paddlers can stay at a local bed and breakfast or one of the many hotels within a ten mile area. The paddle trips are between 10 and 15 miles with longer trips available. Paddlers are also invited to attend a special history film event on Louisiana dancehalls being held on April 9 at the Jeanerette Museum so they may learn more about the culture of our area.
The fun continues as part of the Bear Festival on April 11-12 as paddlers paddle part of the historic Bayou Teche and the Bayou Teche National Wildlife Refuge. Entertainment, food and restaurants will be plentiful. Canoes are available to rent for the Bear Festival Paddle at a small fee on a first come, first serve basis. For Bear Festival information visit www.bayoutechebearfest.org. For more information on any of the paddle events email needtopaddle@yahoo.com.
Posted by Jeanerette News at 6:41 AM No comments: 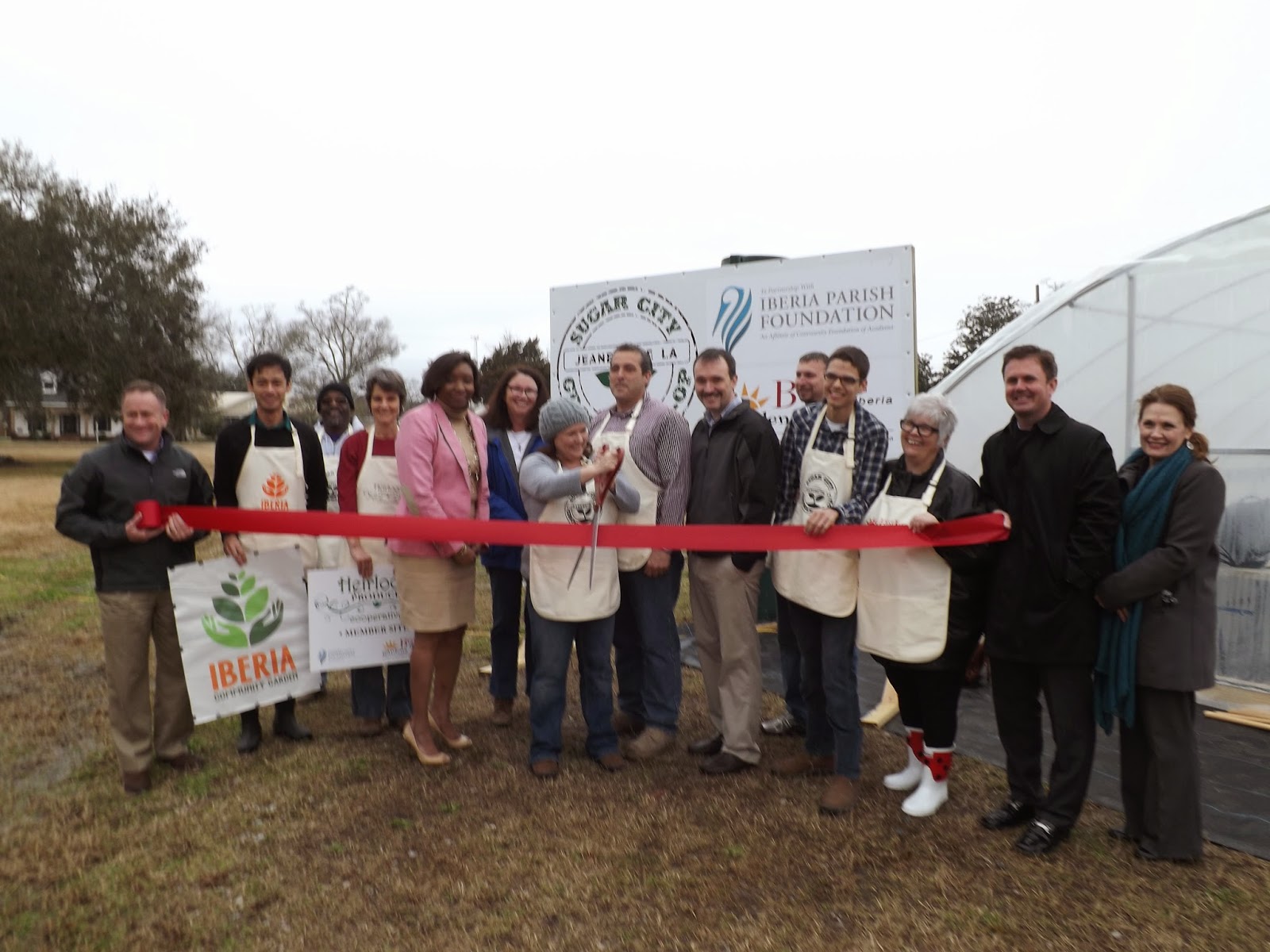 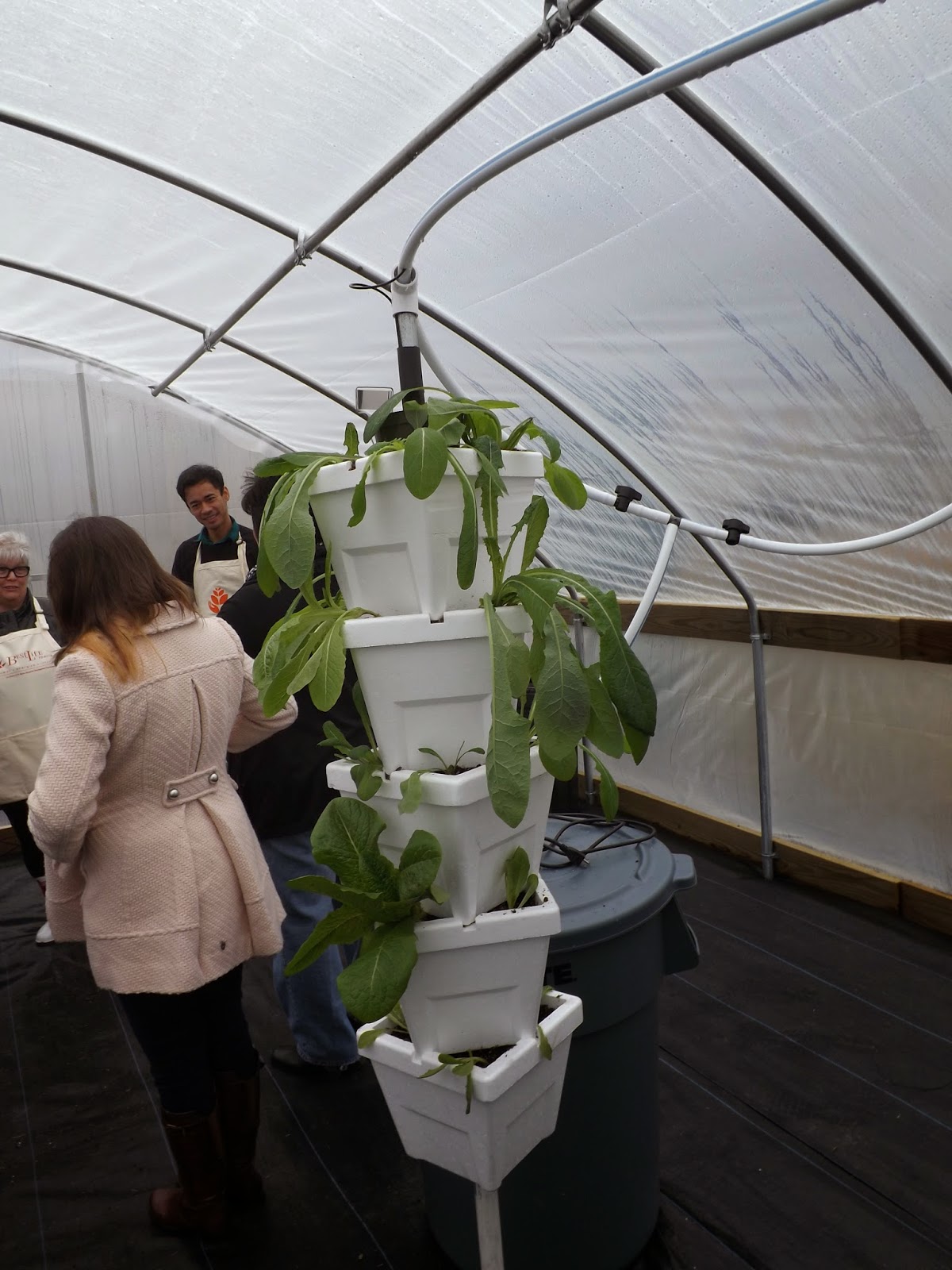 The new Sugar City Growers Coop is now producing fresh vegetables and other plants to provide products for the local Farmers Markets in the area.
The co-op is part of Phase II of the BestLife Iberia Gardens Project. The Sugar City Growers Co-op will bring year ...round vegetable production to Jeanerette through its hydroponic garden.
Posted by Jeanerette News at 6:37 AM No comments: 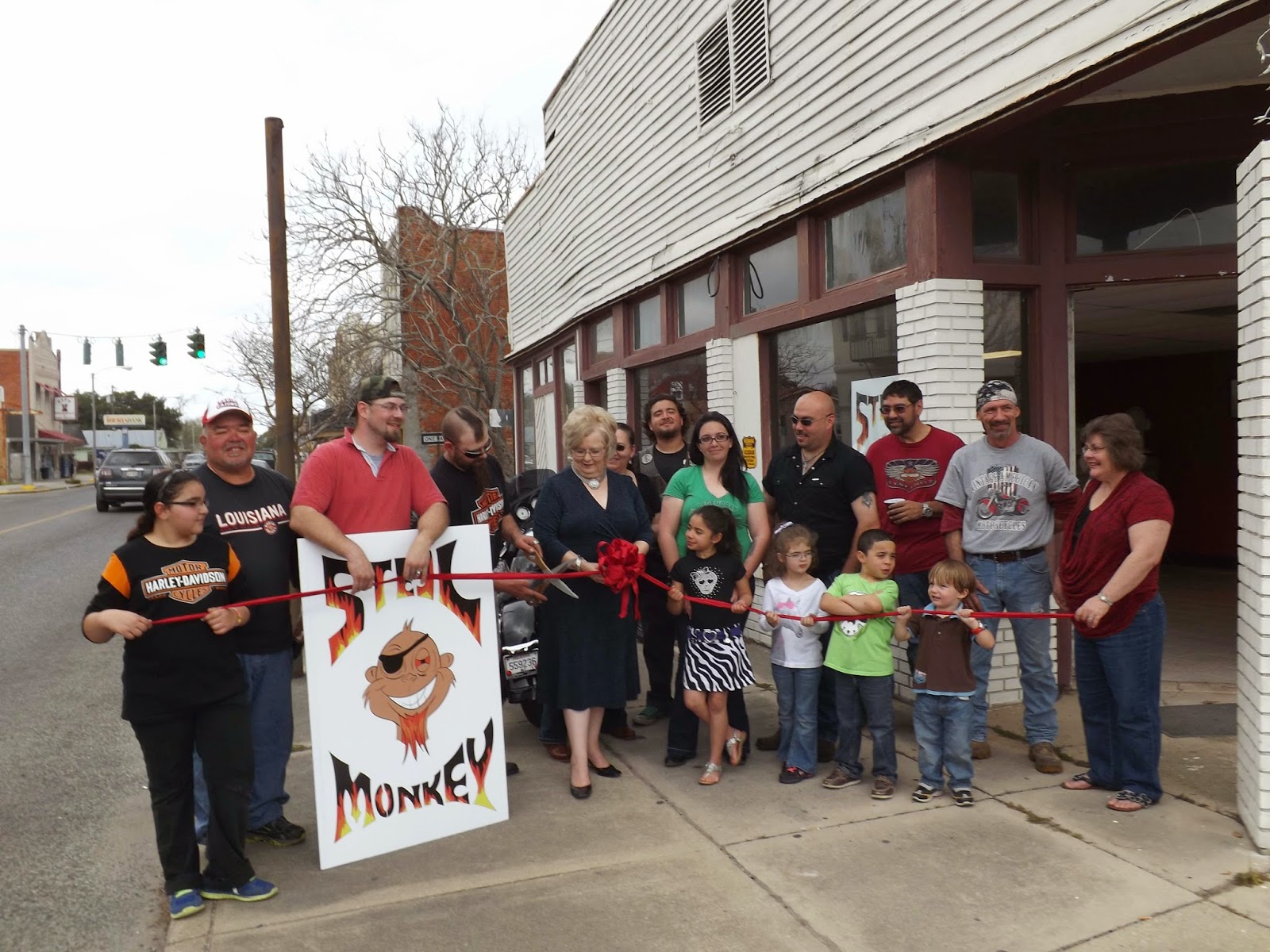 Some times a dream really comes true. For owners of Steel Monkey, a new custom motorcycle and repair shop, what began as talking about their love for motorcycles turned into a full time business adventure.
Owners of the new business located at 1400 Main Street in Jeanerette are Joey Motto, Dusty Vallot, Chad Duhon and Kevin Prejean.
"We always had a love for bikes," said Dusty Vallot.
"One day we said let's open a bike shop."
After Vallot asked his father who owns several businesses for advice, it wasn't long before plans were underway to open up the new motorcycle shop in Jeanerette.
The building offers a showroom, secure shop, and many work areas where motorcycles can be customized. Service work will include oil changes and othermaintenance on motorcycles, four wheelers, dirt bikes and recreational and work items.Customizing motorcycles will be the focus of the business. Joey Motto will manage the business while other owners lend their talents.The owners are excited about being a part of the Jeanerette community since many of their family members are from Jeanerette and Grand Marais. For more information on Steel Monkey LLC visit them at their shop or call them at 337-428-5047.
Posted by Jeanerette News at 6:13 AM No comments:

Inside the Life of Jeanerette's Outstanding Citizen, Kenneth Kern

His family always told him that business and politics don't mix, however, this became the perfect mix for Kenneth Kern who was named as Jeanerette's Outstanding Citizen by the Jeanerette Chamber of Commerce.
Along with a deep tradition in business, Kern has successfully served the community through volunteer work and politics.
Tradition and a love of Jeanerette is important to Kern. In fact, Kern still lives in his family home where his father was born.
He grew up at a time when Jeanerette had about 2,000 more people, he said but the community remained close.
"It was different than it was now," he said of the city. "I think people knew everyone more than what they do now. I've always loved Jeanerette. I would never want to live anywhere else."
Kern's early years were filled with music, sports and school. He was one of 30 to graduate from Jeanerette High School. "Everything that took place you kind of had to participate or they wouldn't have had enough people. I took part in the band and loved music," he said.
His love of music and playing the trumpet gave him the opportunity to attend college on a music scholarship; however he decided to pursue another interest.
"I finished high school in '54 and we had a band. We played dance halls all over this area," he said.
Kern remained in the band until his junior year of college, at what is now ULL, when his studies in chemistry and mathematics required more of his time. He also met the love of his life, his wife Betty Charpentier, around that timeI was in college when she (Betty) was working in Franklin. She was from Adeline but I didn't know her until I had a blind date," Kern said.
He was introduced to Betty by June Rivette. They dated from that first date until they married two years later.
Kern said the secret to a long relationship was "to always say yes." "You can't go wrong," he smiled.
Entering into business was also an easy choice for Kern whose family owned Jeanerette Electric since 1924.
"My father needed me and I liked working here but being in business was the furtherest thing from my mind at the time," Kern said.
Kern began working in the business right after he left the U. S. Air Force and decided to take over the family business after his father died several years later.
"It was a family business. The Eskinds were partners with my grandfather and then me. They (the Eskinds) offered and I bought their interest in the business," Kern said.
Even though Kern had a taste of life outside of Jeanerette when living in Fort Worth while he served in the U. S. Air Force, he never wanted to live anywhere else. Being in business allowed Kern to raise a family of four sons in the community that he loved.
"It think being raised in Jeanerette is an ideal situation," he said.
Kern's love of the city eventually led him to pursue politics, although he was hesitant at first. He was elected to the Jeanerette City Council where he has served three terms.

"I do speak my peace for better or worse," he admits. "I've always tried to lend my opinion."
Kern loves that Jeanerette has maintained its small town appeal throughout the years and hopes that this will continue to attract residents.
"The thing I love the most about the city is I know just about everybody and everybody knows me," he said.
Kern would like to see the city limits expand and is proud of the accomplishments of the city.
Kern said that there was no secret to being an outstanding citizen, "it's just in the trying."
"I feel fortunate to have grown up in Jeanerette," he said.

Posted by Jeanerette News at 1:38 PM No comments:

Posted by Jeanerette News at 1:35 PM No comments: