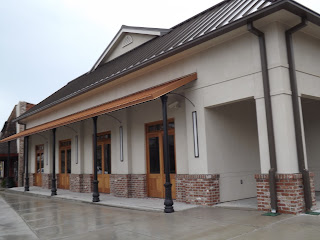 "With almost 70 employees, no room can accommodate us," he said. The new meeting area will also be used for customer seminars and community functions, he added.
With online banking opportunities available for customers, the bank plans to host seminars for its customers to better understand these new services, Migues said. The meeting room has been designed with audio and visual equipment to be able to host the seminars and can seat from 75-80 people.
The other areas of the building will be used for office areas for many of the non-customer contact personnel and will include a new computer room that is fireproof, secure and upgraded, Migues said.
The bookkeeping department of the bank will be housed in the front portion of the building and customers can access this area from the Main Street entrance.
"We designed the building to be asthecially pleasing to Main Street," Migues said. The building itself sits on an angle but is actually squarred to the property line, Migues added.
The building being on an angle allows for a better view for customers exiting the drive through and gives customers more room when entering the building. The entire building is handicap accessible, he added.
The lots the building sits on became available through landowners piece by piece. The lot next to the current Main Office location was rented out for two years before construction began.
Construction on the new office building began last June and has taken a little over a year to complete but was well worth the effort, Migues said.
Posted by Jeanerette News at 6:05 AM No comments: 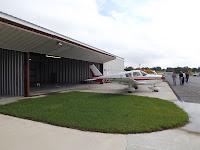 Iberia Industrial Development Foundation (IDF) Executive Director and CEO Mike Tarantino, welcomed guests at the ribbon cutting cveremony of the new box hangars at the LeMaire Memorial Airport in Jeanerette.
The 13 new hangars were built at a cost of $1.2 million with funding from the Louisiana DOTD and the Iberia Parish Council said Jason Devillier, Airport Director for the Iberia Parish Airport Authority.
LeMaire Memorial Airport features a 3,000 foot lighted asphalt runway and serves mainly single engine planes, small muti-engine aircraft and helicopters.
While some of the hangars have been rented, some are still available.
For more information, contact IDF.
Posted by Jeanerette News at 5:59 AM No comments:

Jeanerette Bicentennial Museum honored two of its original board members from 1976 on July 10, 2013.
A crowd of about 100 gathered to honor the two ladies that have given so much to the museum and the community.
Honored were Teletha Davis Duchane, who served as the first secretary of the museum board, and Anna Joyce Breaux.
Both were pleased to celebrate the museum and this honor with family, friends, and the public.
The names of the original board of directors and the names of the original museum committee were read during the event shortly before the two ladies were recognized with plaques for their accomplishments.
"Little did I realize that in 1976 that an evening such as this would occur," said Teletha Duchane. "Our museum is a beautiful place."
Mrs. Duchane was the first secretary of the museum board and helped to write the first By Laws of the organization. She also worked as a commissioner of voters for many years.
Mrs. Anna Joyce Breaux thanked the audience for working hard to support the community.
"We want the best for Jeanerette and I think this museum and its addition is wonderful and I think so many people will enjoy it," she said.
Mrs. Breaux served as a teacher and librarian for 50 years n the community and has been active in many organizations, one of which she has served in for more than 60 years.
Mrs. Breaux encouraged school groups to continue to visit the museum to learn about Jeanerette's past.
​
​
Posted by Jeanerette News at 5:56 AM No comments: